We had a lovely long weekend, and really enjoyed the good weather.

On Friday night, the boys were outside playing (crushing rocks). 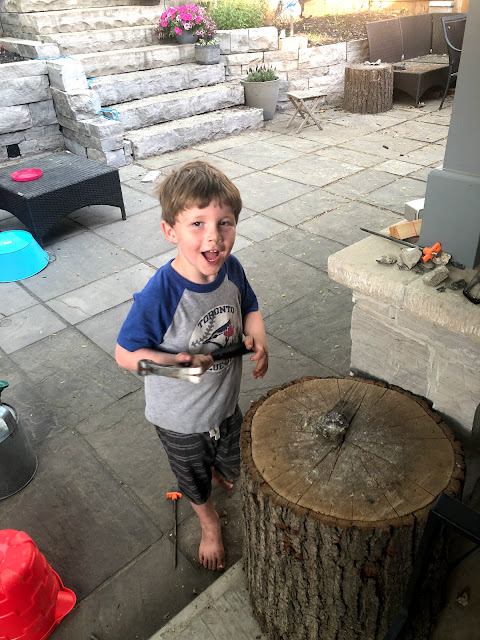 We had pizza for supper and then the boys came back with wet clothes after a water fight. 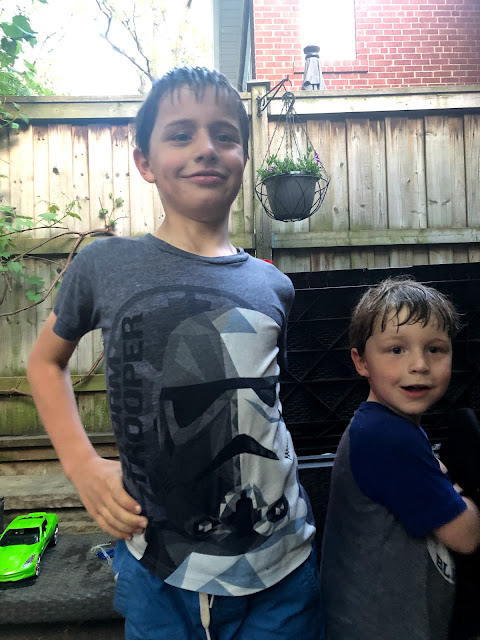 On Saturday morning we had plans to meet up with one of Q's friends and his family to try our hand at the Moonbeam Books scavenger hunt.  Can you smell this photo? 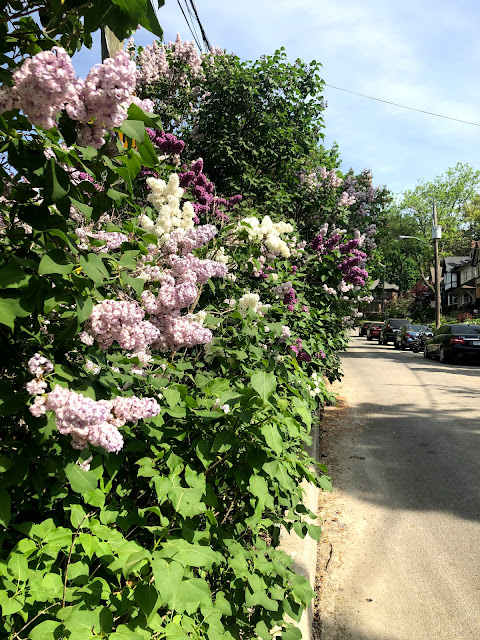 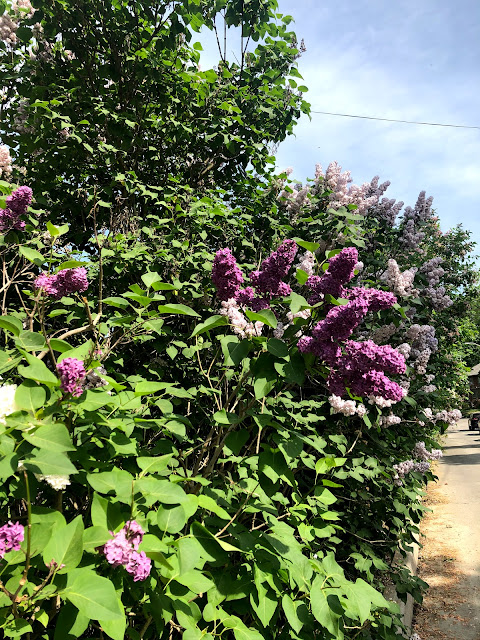 We picked up a sweet treat to start our morning.  Then we just walked around looking for the pictures that were hidden around the neighbourhood.  We only found a few but it was a good way to spend the morning.  We also played a bit at the playground and saw some other friends there. 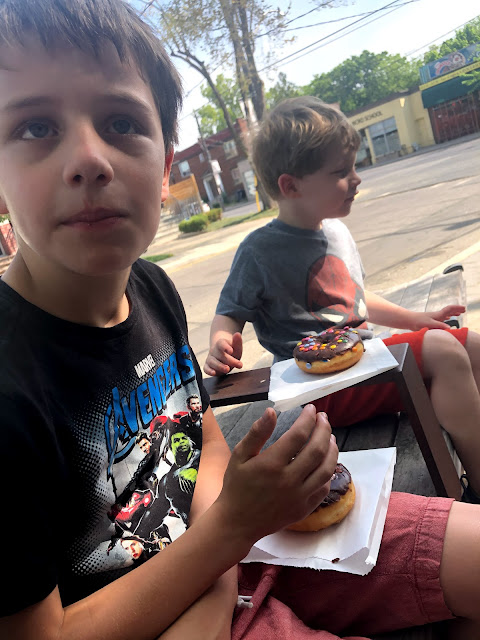 In the afternoon Dave got out for a round of golf now that the clubs are back open in Ontario. 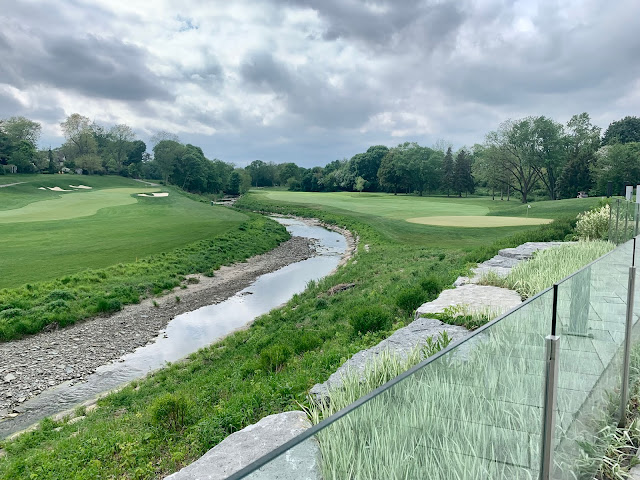 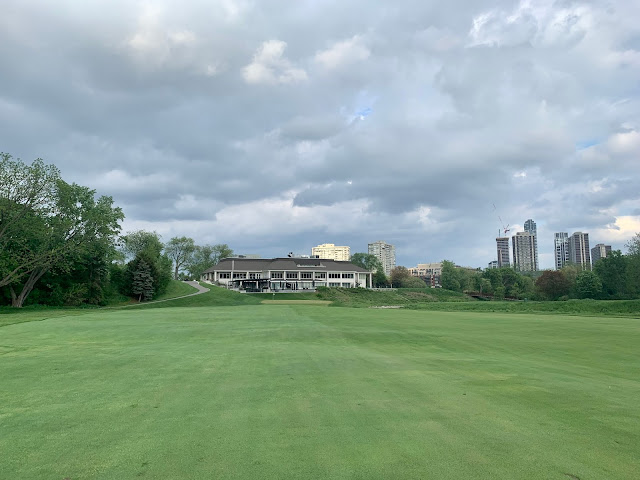 Meanwhile I took the kids for a walk to get bread.  We ordered some food and put a movie on the outdoor screen for the kids. It was a late night for everyone.
On Sunday morning we went for a bike ride on the Lakeshore and stopped into the bike park. 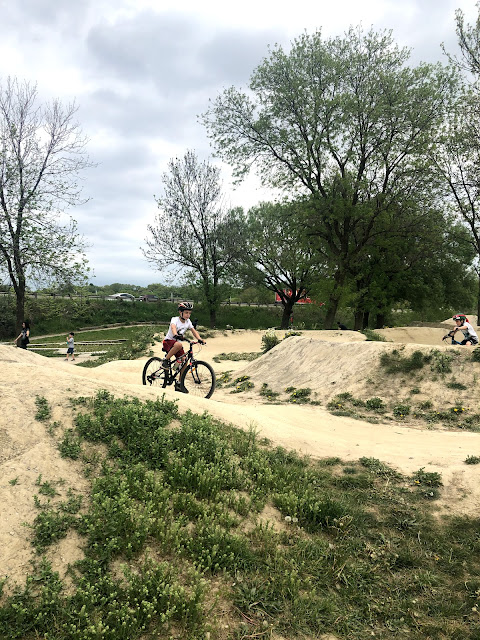 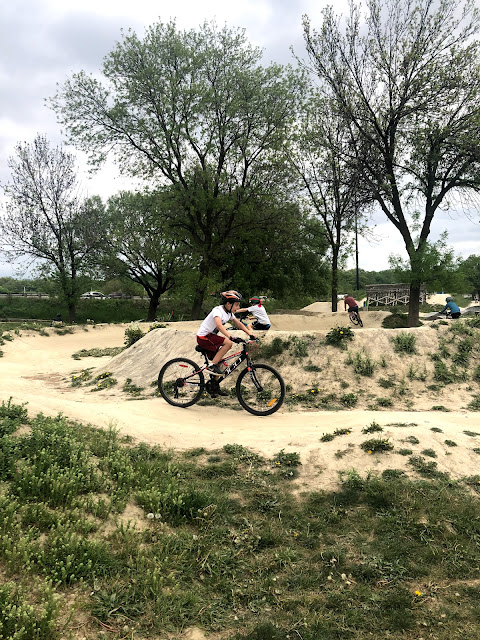 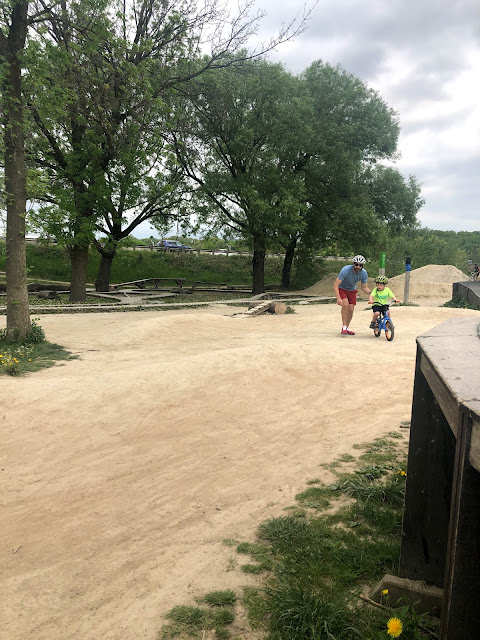 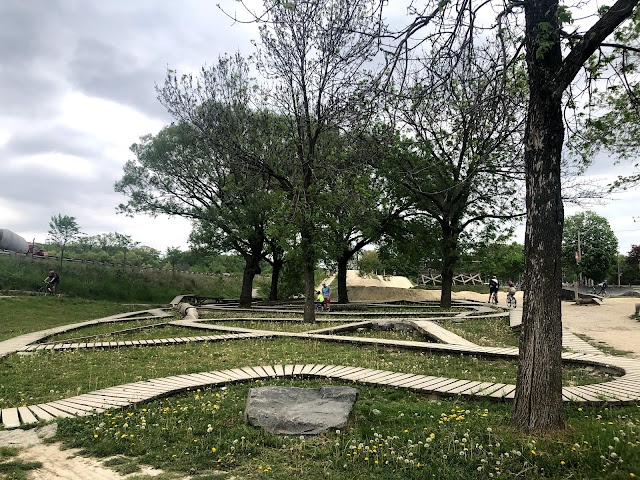 Q didn't want to pose for a photo. 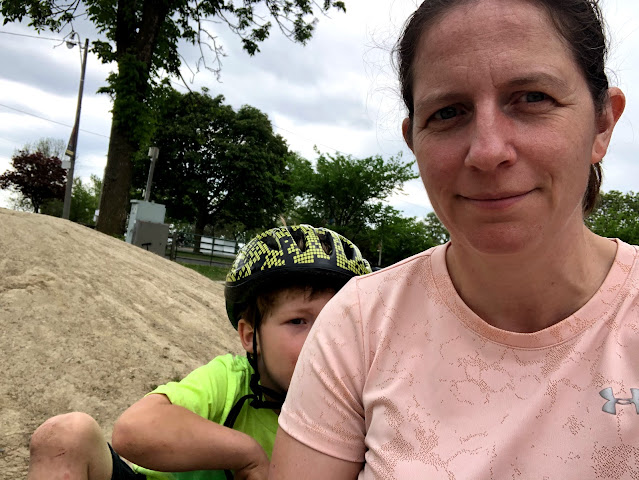 But I caught him! 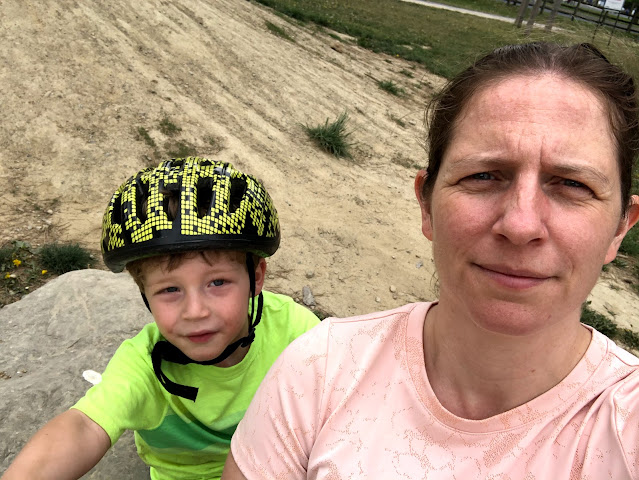 In the afternoon we went for another bike ride to get an ice cream cone and we also did some more scavenger hunting.
Dave and I were celebrating our anniversary on Sunday so we had bought a food box from Culinary Adventures.  There was a spatchcock chicken ready for the grill, and ingredients for a potato salad, green beans, and cherry pie (plus some other goodies like cured meat, loaf of bread, and smoked salmon). 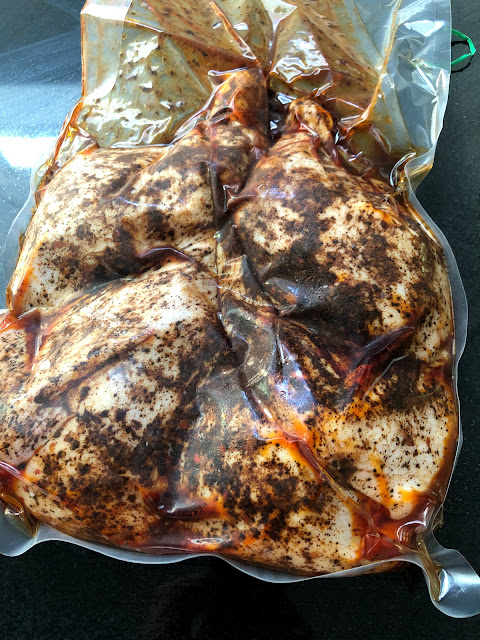 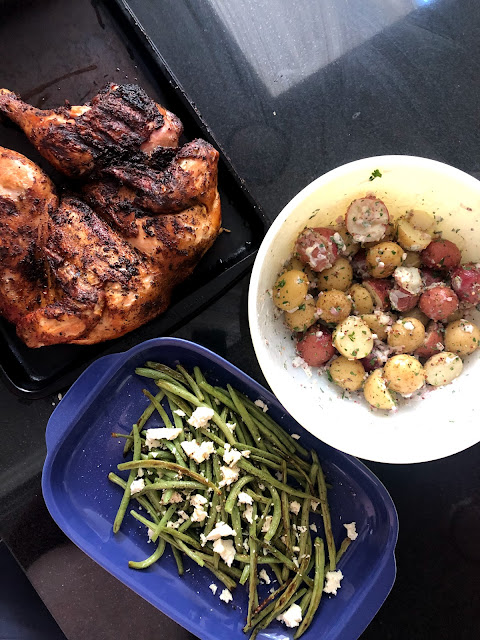 Happy Anniversary!! We finished up the golf (yay Phil!) while the kids were outside. 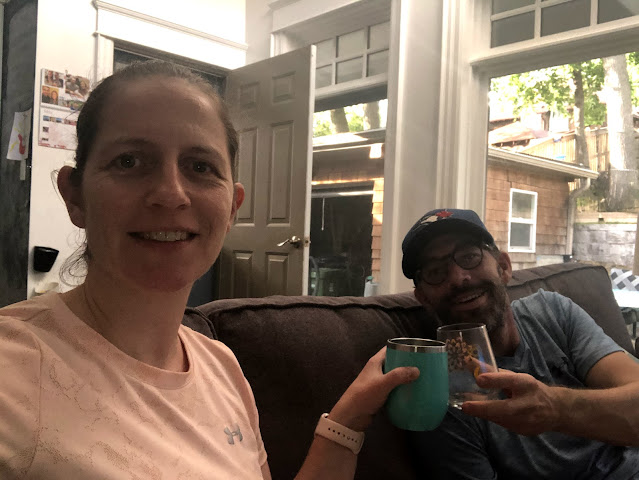 Monday was a holiday of course, but I set my alarm so I could get out for a run before Dave left to go golfing. It was a beautiful morning to be out.
That said, it was slightly chillier than the day before so Q thought he needed his winter coat, hat and mittens. 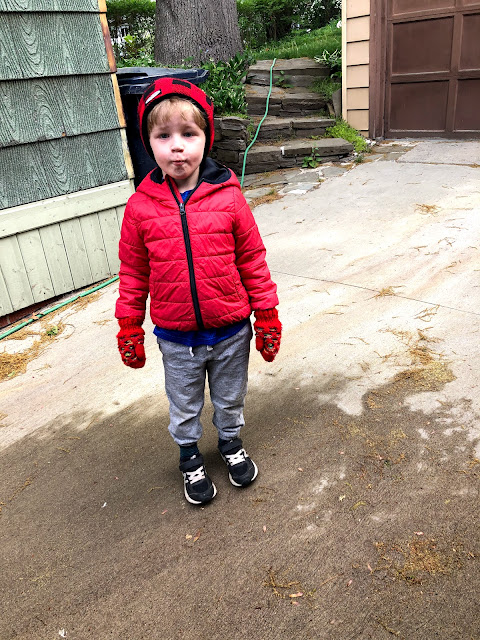 He did remove the hat and mitts but left his coat on while we went to the playground and for a hike in High Park. 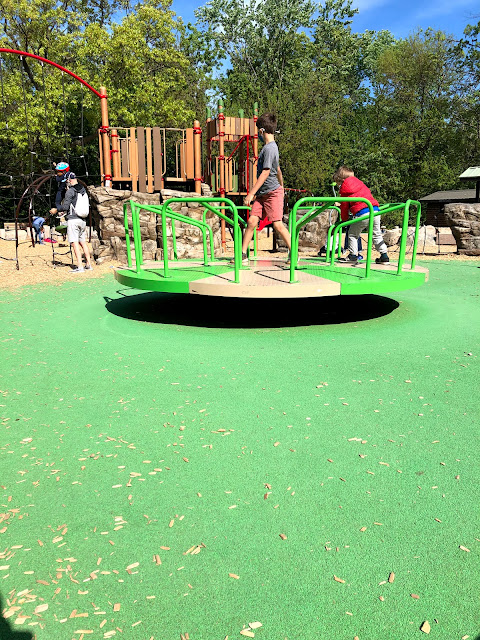 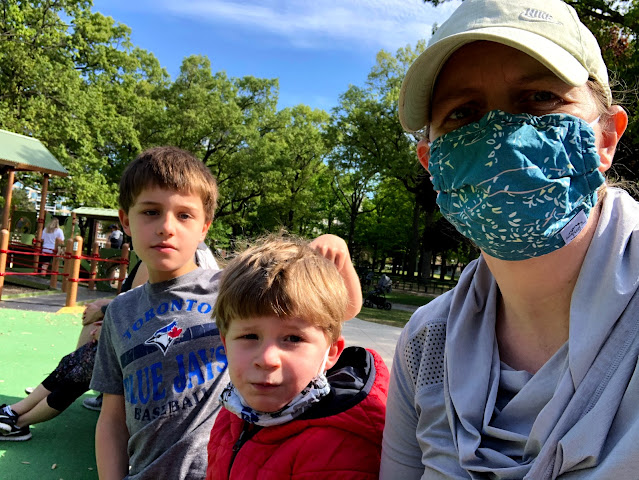 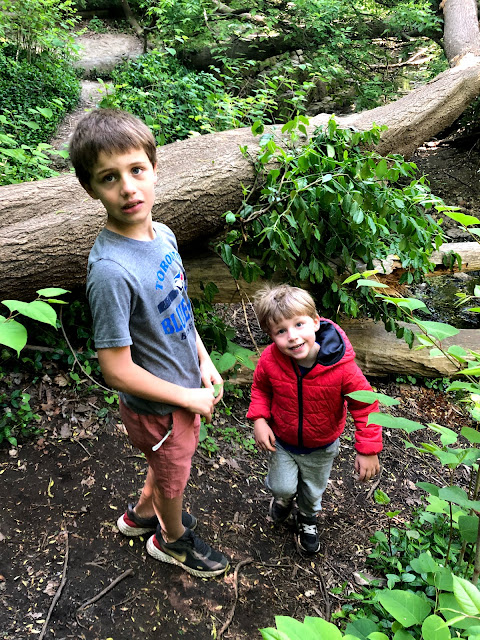 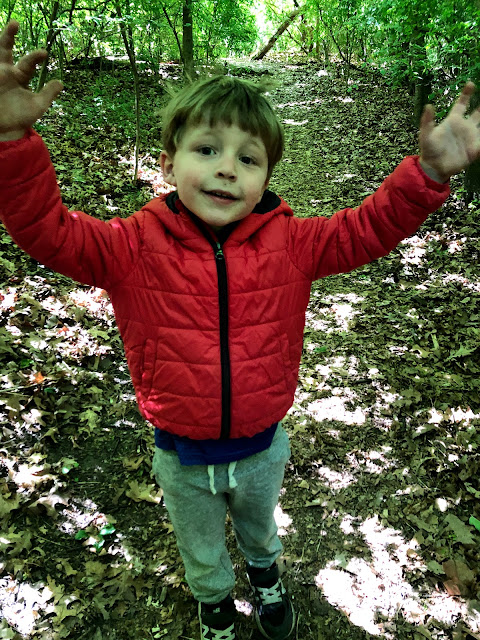 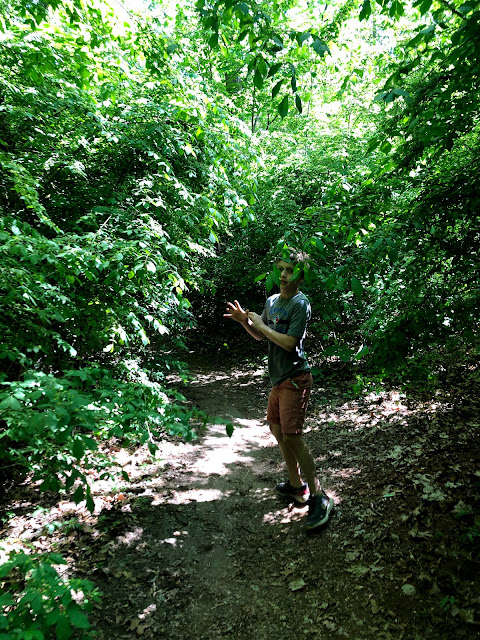 When we were done at the park, I took the boys to McDonalds for lunch which we took home and ate on the grass.  We all had some quiet time after that, I read, and the boys watched TV.  Then Q actually fell asleep for awhile so when Dave got back E and I went for a bike ride to see if we could find any more clues from the scavenger hunt.  Over the three days we looked, we only found 10 out of 20, but we still submitted our entry since there are participation awards.  We had supper (leftovers) outside and then set up the outdoor screen for Game 3 of the Toronto-Montreal series.
Loved this long weekend! It's the kick off to summer, only one month of school yet, keep the vaccines coming!