Two books for you today - first up is one from my reading list, The Alice Network by Kate Quinn. 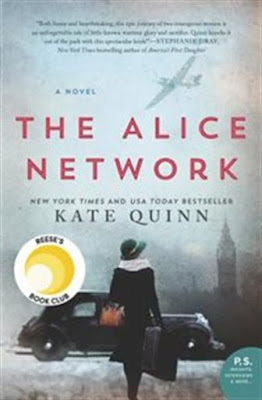 I usually enjoy books about wartime and this was no exception.  This one flips back and forth between World War I, where a British woman has been recruited to be a spy on the Germans in Northern France, and 1947, shortly after World War II when an American girl comes to Europe to find her missing French cousin.  The American connects with the British spy and the two women form an unlikely alliance.  What I liked about this book was that it focused on World War I, which I tend not to know that much about, and that it spoke of contributions made by women to the war effort, and not the usual nurse or factory worker, but spies, put in real danger like the men.   It was not until the end that I realized some of the characters are based on real people - I won't tell you who, and I won't tell you which stories are true, instead read it yourself and it will seem all the more amazing when you realize some of the story really happened.

When I started reading, it felt very similar to other war books I've read, but there was something grittier about this one that I grew to appreciate as the book went on.  This was real life, not some dressed up romantic novel.  I see that Kate Quinn has another book out now that seems kind of similar - two women who get together to find someone, and I'm guessing the chapter will go back and forth between their stories - but I am intrigued because of the Russian aspect of it, and when I'm ready for another war book, I will pick up this one.

The second book I recently finished is quite popular and I've been seeing it around for some time - Educated by Tara Westover. 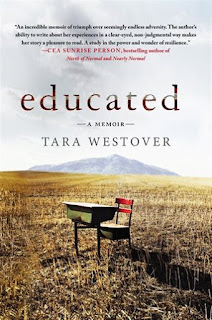 When I started this book it seemed very similar to The Glass Castle, and I wasn't overly impressed.  But as I kept reading, I got more and more into the story and looked forward to my subway rides when I could read more.  This is a memoir - the author grew up in rural Idaho, raised by parents who did not believe in sending their kids to school or to the doctor.  Her father was constantly preparing for the end of the world and was a devout Mormon who had extremely radical views.  This summary however does not accurately portray their life, I could not believe what the author (and her siblings, and parents mind you) experienced and suffered.  There are multiple occasions where people suffered severe injuries and they did not go to the hospital, believing instead that her mother's homeopathic remedies (and God) would heal them.  The abuse also suffered by the author and others is also extreme. Her father (and by extension her mother and brothers) believed that women should behave a certain way and that they needed to be controlled.

The book is called "Educated" and there is significant focus on how Tara goes on to achieve an education despite never going to school (you could not even say she was homeschooled as her parents made no effort to teach them anything that you'd find in a regular public school), but I think it is the lack of belief in doctors and hospitals that stuck with me the most.  It's one thing to refuse to take Advil when you have a headache, and try a homeopathic remedy (I do that myself sometimes), but when someone has a significant head wound or third degree burns, and no one even considers going to the hospital, it is startling.  Tara's father said it was God's will and His angels would protect them, and although I agreed with absolutely nothing else he said, I almost wonder if he was right about this.  It seems nothing short of a miracle that these people survived these injuries (and also escaped other injury), when plenty of people die of much less.

Having never experienced abuse, I found it very exasperating that she could not just leave her family and never look back.  She went back so many times and struggled so much with her feelings of guilt for not believing what her father told her, wanting to remain close with her family, look after them, and still put herself in danger.  I could not really understand it because it was so obviously a toxic environment.  But you could see that when you have spent the majority of your life being told one thing, and being treated a certain way, it is the only life you know and it can be difficult to want to change and turn your back on that life.  It's her family, and you only have one of those.

When you read the book and see what she did with her life (spoiler, she is a successful writer) you realize what the human spirit is made of and that one can overcome anything if you have the right motivation.

Did you read this book?  What stuck with you the most?