We were excited to see this guy on Friday!  He spent the week with Dave's parents and we went down to get him on the weekend, and spend some time there, along with Dave's cousins.  We did some hot dogs over the fire when we got there, and had a fairly early night. 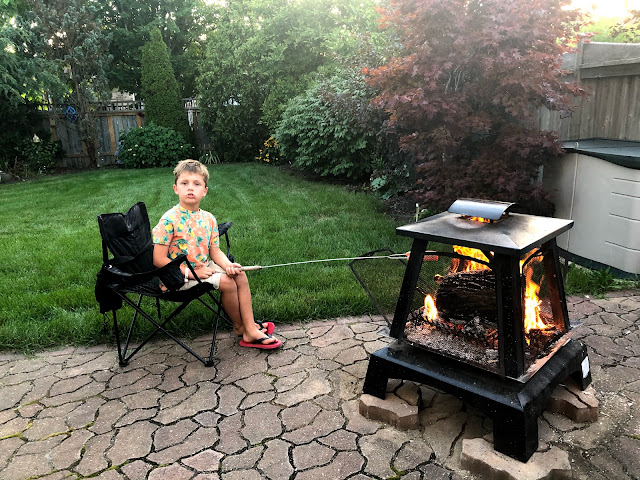 The next morning we went to the beach.  The plan was for Dave's cousin's dog to swim a bit.  He is a rescue dog from Mexico with a few nerve and joint problem, so swimming should be his preferred exercise, but he is still warming up to it. 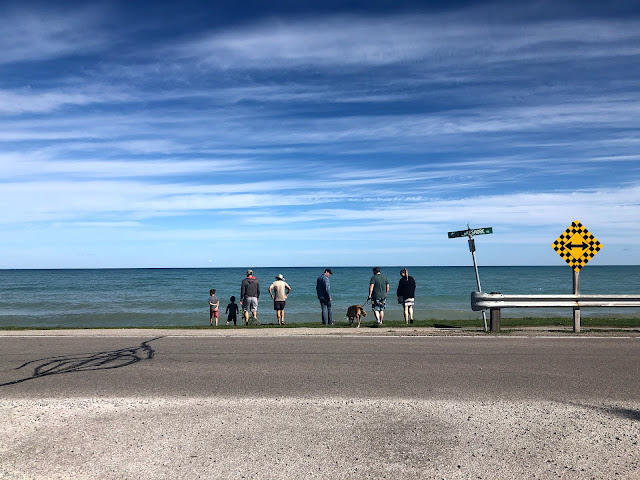 The water was very high and we were only able to find this small patch of beach to play on.  We didn't bother to get the kids into their swimsuits since we weren't sure how long we would be there.  They did get fully wet though, the waves were rough but super fun. 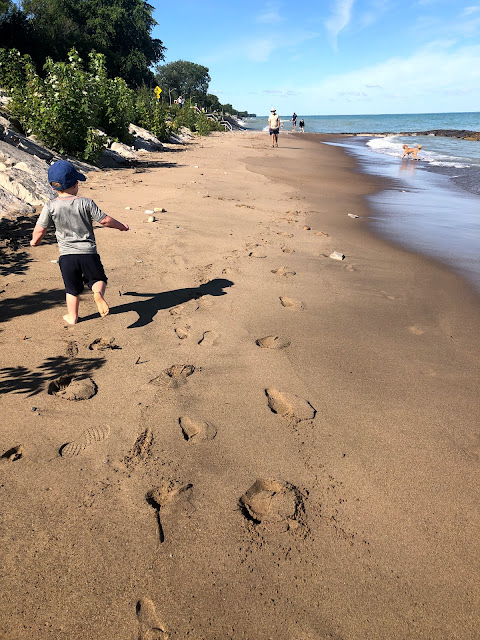 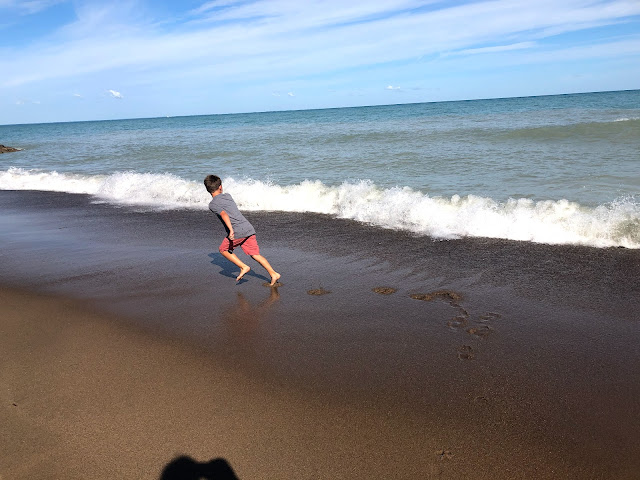 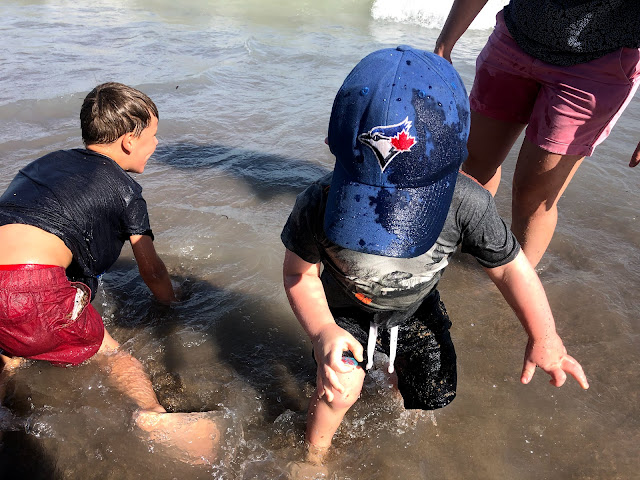 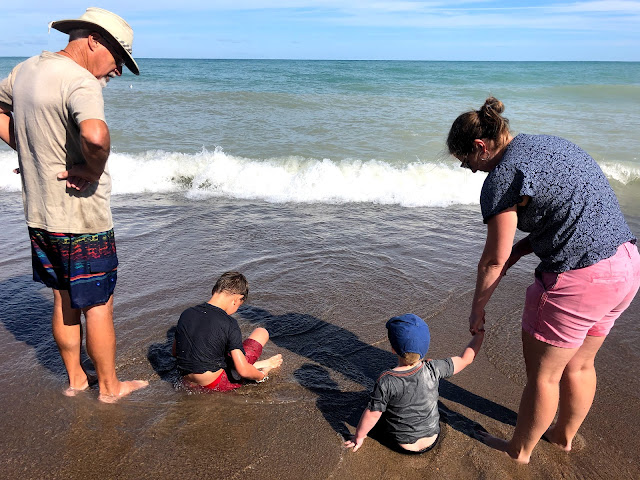 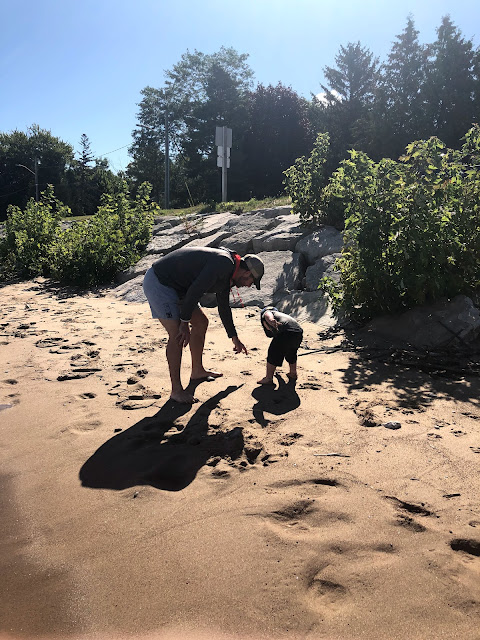 We went back to the house and got cleaned up and headed into downtown Sarnia.  We at at the Tin Fiddler and enjoyed their back patio.  This guy fell asleep in the car so was a little sleepy and cuddly when we sat down to eat. 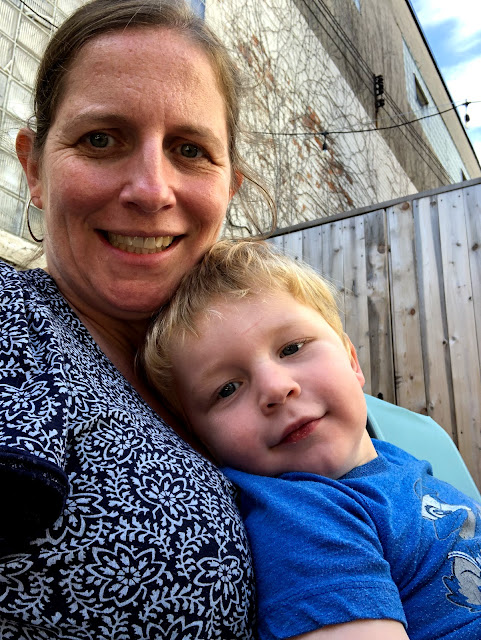 Playing on the "lawn" while waiting for our food. 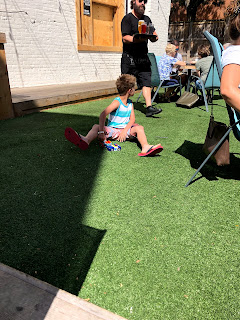 After that we walked down to the Refined Fool Brewery.  We have visited here many times and it is always fun.  We played a few games and sampled a few brews. 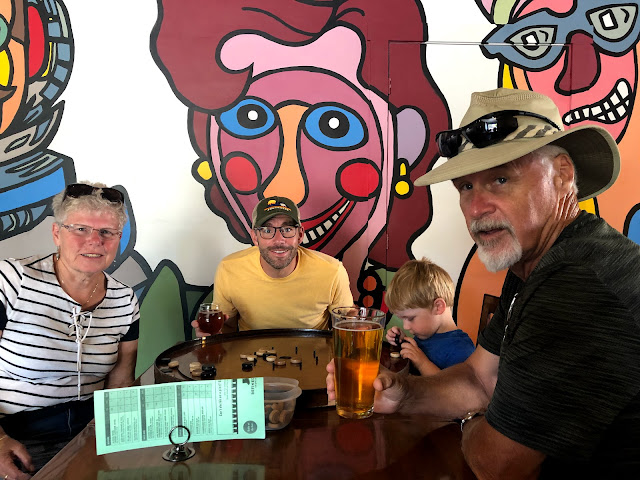 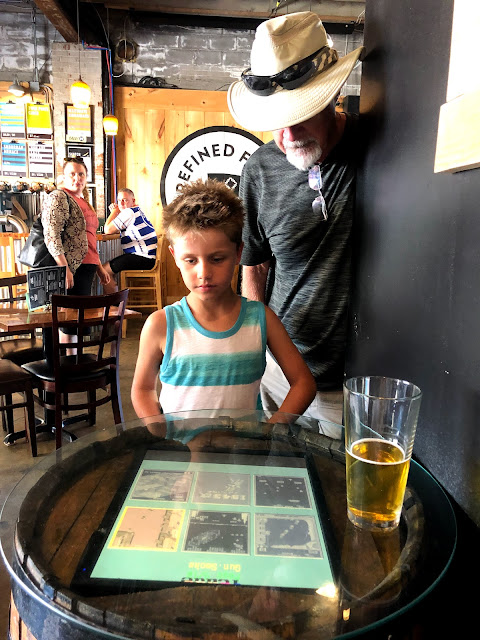 Q and I went home (along with Dave's mom) while the rest of the group did some errands.  We all had a nap.  Then Q joined me on the couch and we watched Incredibles 2. 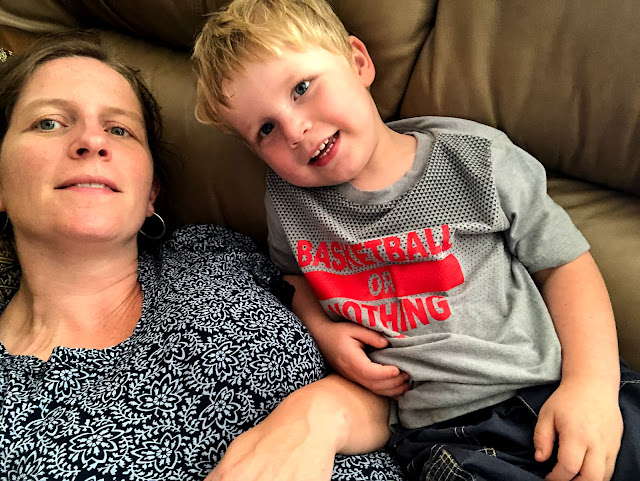 Some playing the yard when E got home. 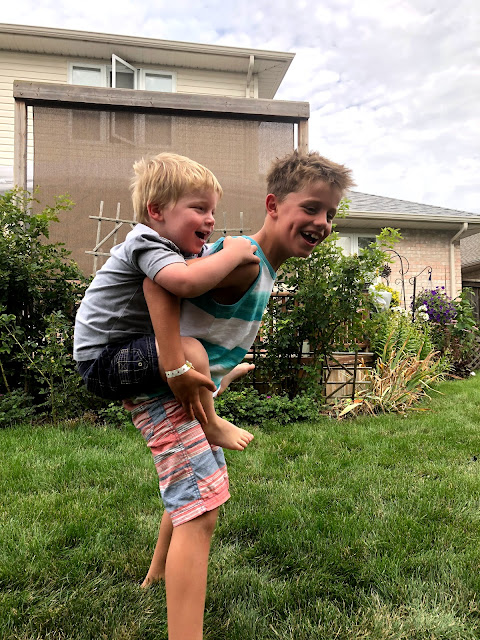 A few friends came over to celebrate Dave's mom's birthday and we had lots of good food, including some birthday cake, of course! After everyone went home and Q went to bed, we all stayed up way too late watching the tennis and the Great British Baking Show. 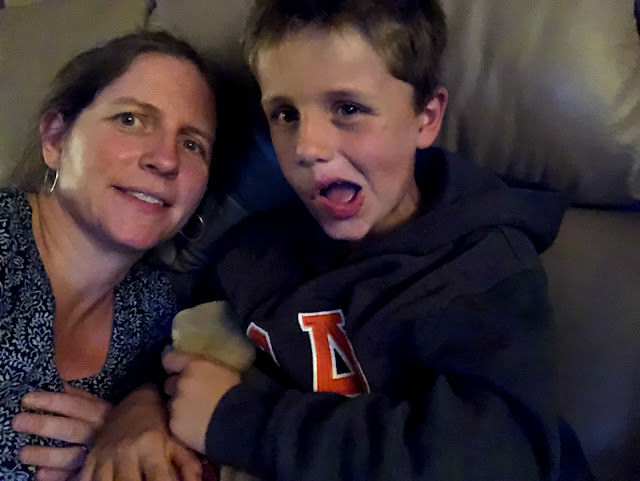 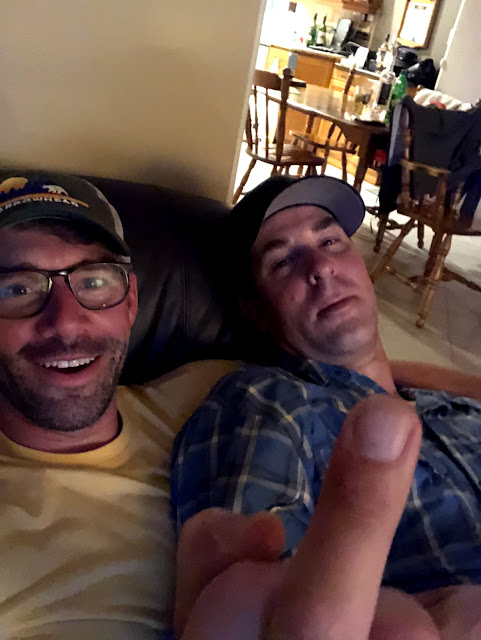 The next day was Sunday and we didn't get up to too much.  It was raining so our plans to for a sail were thwarted.  Instead we went for a couple of walks, played a new board game, ate the leftover food from the party, and rested.  We also hunted down the flies that had gotten into the house, everyone had a swatter. 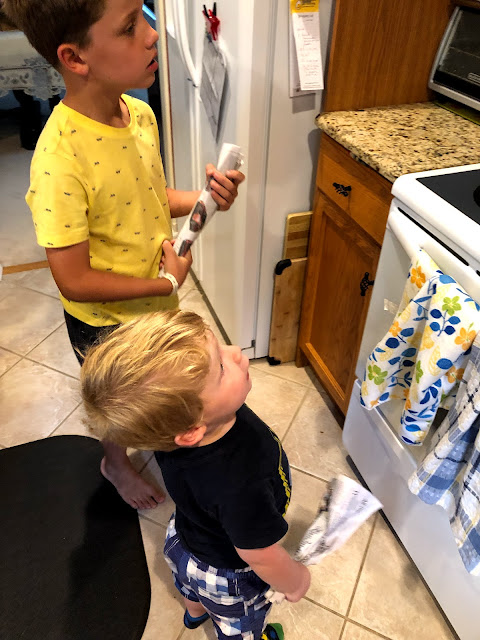 We did go down to the yacht club after supper to watch the fireworks. 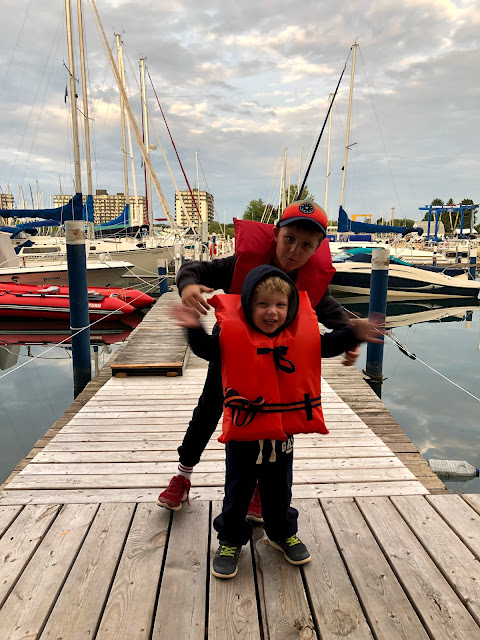 Checking out Grandma and Papa's boat. 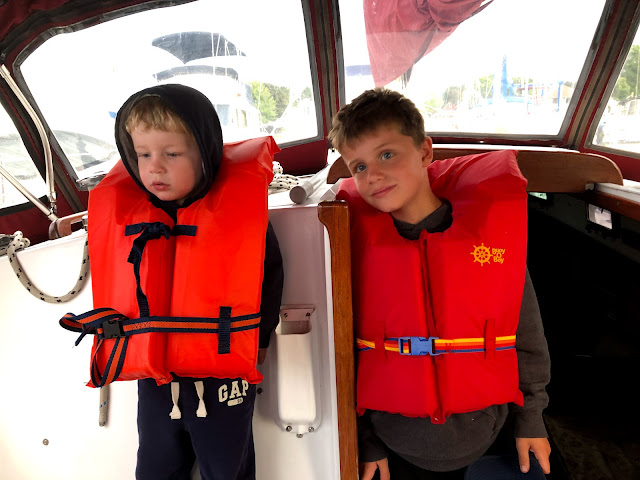 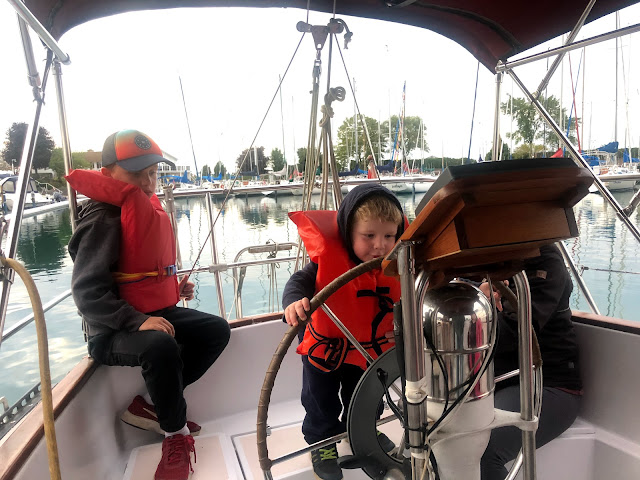 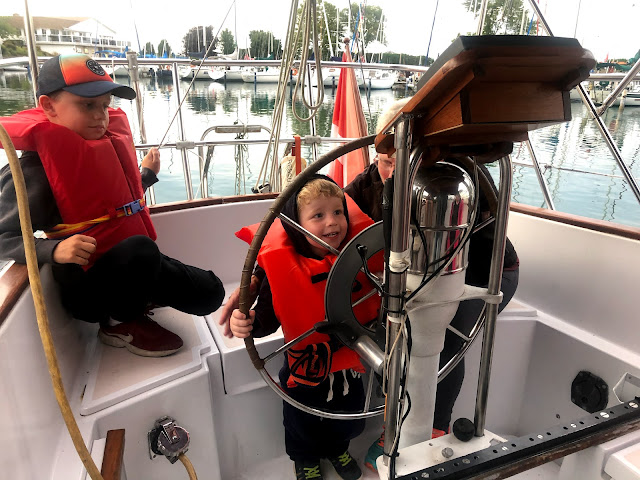 A beautiful night to be by the water. 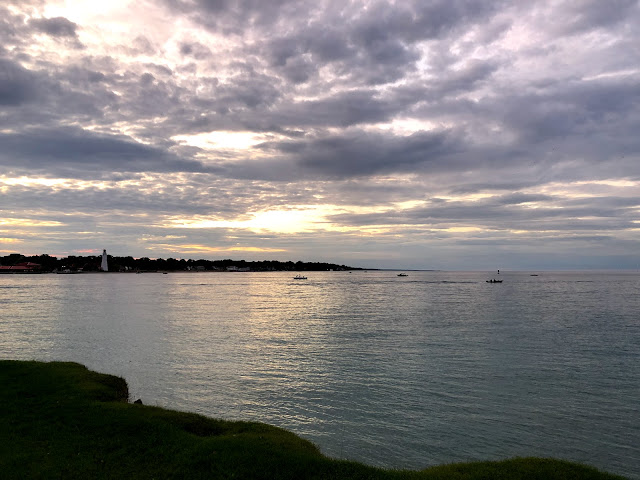 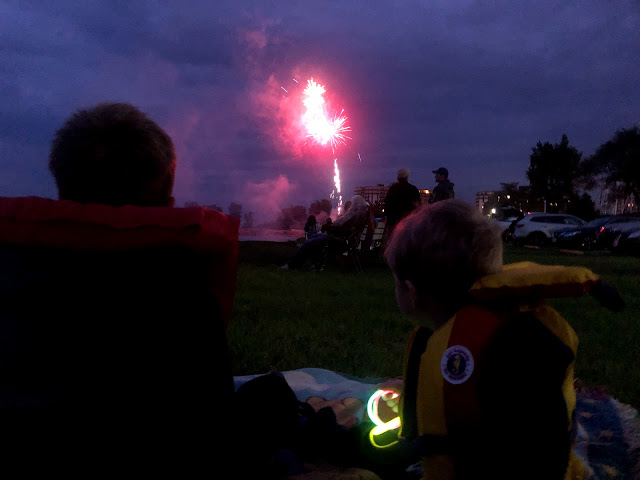 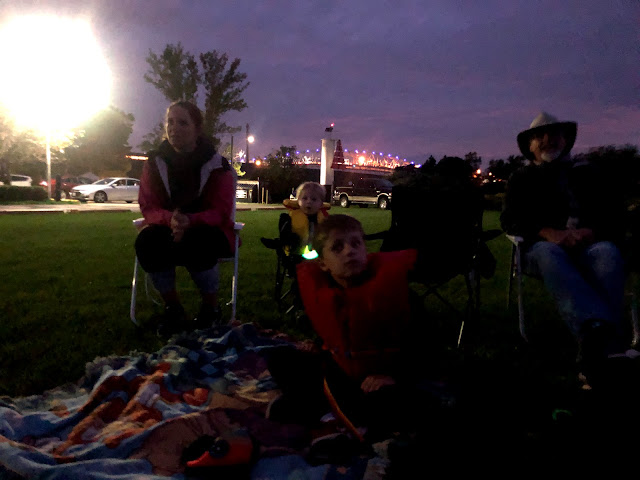 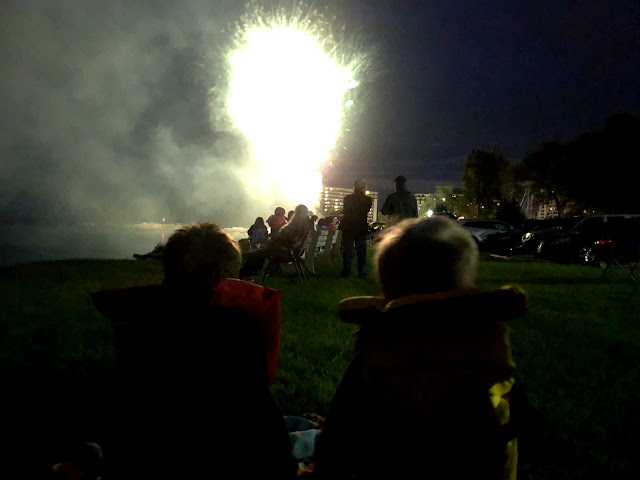 We went home on Monday morning to get ready for the week.  After switching the boys' rooms, I had to swap the clothes in their dressers, so also took this opportunity to weed out clothes that don't fit anymore.  While I was doing all of that, Dave took the boys up the street to get a few things for supper.  While Q was napping, E went over to his friend's house and then we didn't see him for the rest of the afternoon they took him for a bike ride and then fed him supper.  He had a great time on his last official day of summer vacation. 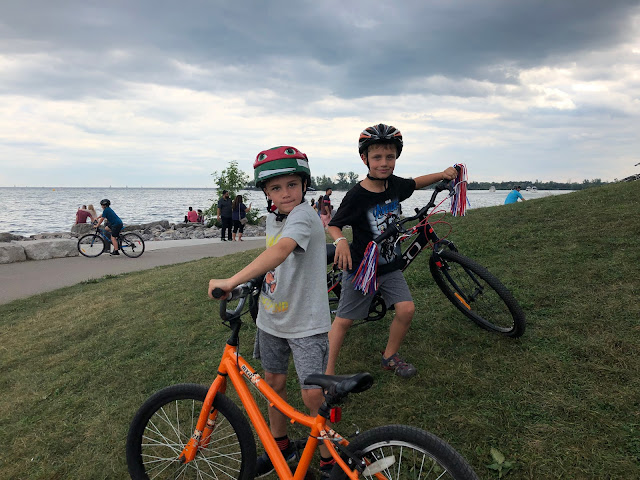 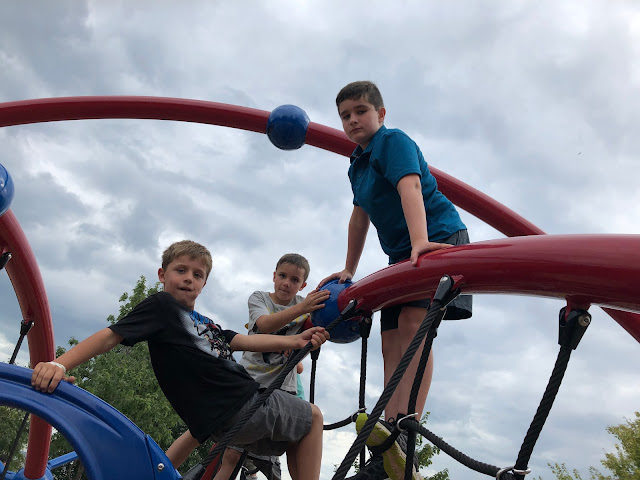 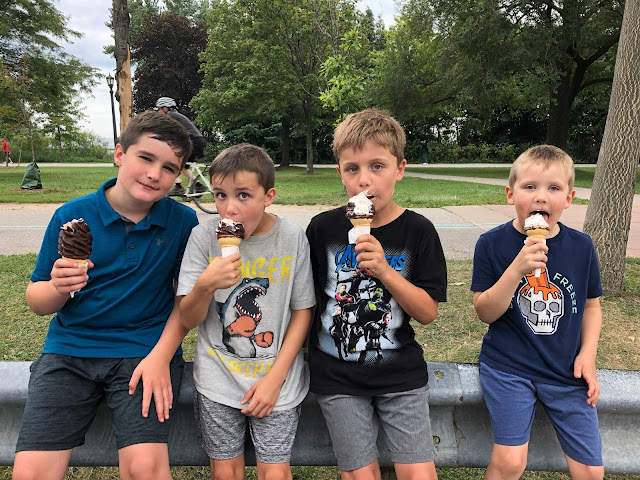