A little recap of our time since the coronavirus came into our lives. Settle in. 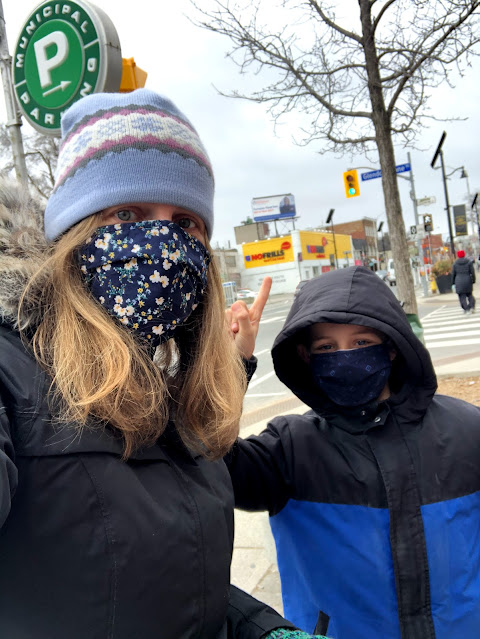 January 2020 - We travelled to Hawaii and thought nothing of the virus.  I knew about it and that it had rumblings of being a problem, but since SARS never turned into a global pandemic, then that sort of outcome wasn't even on my radar.  At that time we were thinking about the forest fires in Australia and the Ukrainian flight shot down in Iran.

I did see that the Coronavirus was becoming a bigger problem in China so I started to pay attention.  I saved the Johns Hopkins tracking tool on my computer and checked it everyday.

I travelled to Timmins for work in the week of January.  I wore a mask on the plane because I had a bad cough and I didn't want people to be suspicious of me.  I saw very few people with a mask at the airport.

I started thinking about how our business (mining construction) might be impacted if the coronavirus really took off.  People at my office didn't seem too concerned. It also seemed inconceivable that governments in Canada could impose any sort of lockdown restrictions like we were seeing in (Communist) China at this time.

February 2020 - I admit that other than trying to wash my hands more and trying not to touch anything on the subway (which I always tried to do anyway), I didn't think too much about the virus.  However I did think to get extra toilet paper and we started stocking up on extra food, just in case.  My cough was still with me and I did end up getting a chest x-ray but no evidence of a major problem so I was prescribed a puffer, nasal spray, and sinus wash and eventually I got better.

We had dinner with our friends at the end of February.  We talked about the virus since our friend is an infectious disease doctor.  Dave and I were kind of flippant about it, and Mark said this is going to be a big deal, what we saw happening in Italy was going to happen here, so we were quickly sobered to that thought and realized we should be thinking more about this.  Interestingly we were crammed into the restaurant we ate at that night, Nodo. I believe the last time we ate out at a restaurant before the first lock down.

March 2020 - We had a trip planned for Jamaica, departing March 20.  We started wondering if we should go, and went back and forth and whether it would be okay.  My parents had a Northern European cruise booked for April and at this point were still thinking they would be going on that cruise.  And then of course things just shut down, and I think it was the shut down of the NBA that really got things going.  It was like, "whoa, if they are shutting down major sports, this is a big deal!".  Then it was announced that the kids would have two more weeks off from school after March Break.  We thought, "What are we going to do with them for three weeks!?!" (how naïve we were).

We made the decision to cancel our trip to Jamaica, which of course became a moot point when travel became restricted shortly thereafter.  We thought about when we would try to reschedule, the friends we were travelling with thought about May and we thought we would go in November. Obviously, this trip has yet to be rescheduled.

I attended an in-person fitness class on Saturday, March 14 and remember thinking, "I don't think I should be here".  I also went to the office on Monday, March 16, but drove in instead of taking the subway.  I remember packing up my things and knowing it would be awhile before I returned.  Even though I have gone in a handful of times since then, a permanent return to the office is still a long way off.

My work carried on throughout this time as our business was declared essential, and we had to deal with lots of different challenges, like travel for our employees to remote mine sites, and making sure we were doing everything possible to keep people safe.

We stayed home, other than some hikes, and we stayed away from others.

April to June 2020 - School and daycare remained closed and online school started for E.  Work was also very busy as we tried dealing with the pandemic's implications on our business.   It was a stressful time of juggling work obligations and the kids being home.  What I found most exhausting is that I was thinking about Covid all of the time.  It was just a constant theme in everything and I didn't even know what I was worried about after awhile - was it my own chances of getting sick, what was socially acceptable behaviour, whether we would ever get back to normal, how the kids were doing, etc. and that of course on top of all of the other regular worries.

The online set up for E wasn't great so I mostly just yelled at him to get his work done.  And we tried not to have too much TV time for Q, but that's often how it worked out.  We did try to get outside most days and that was helpful.  We left the city for the first time in months and went camping at Sandbanks at the end of June.

July and August 2020 - There were very few options for summer camps, but we did get E to a soccer camp and a couple of golf camps.  Work was slightly less busy so I could balance a bit better.  I also started getting up early to work before anyone else got up.  That freed up some more time during the day to entertain the kids.  At the end of the summer I realized that my parents were not going to be able to come for Christmas so that was sad, but we knew that even though vaccines were being developed, they would not be ready for Christmas and so no travel for my parents.  Also Nova Scotia was not going to lift their mandatory 14 day quarantine anytime soon, so travelling there wasn't an option either.

September 2020 - The kids finally returned to school and it was wonderful.  Even with the masks, daily health screenings, and other measures, it was great for them to be back in the building.  And Q was starting Junior Kindergarten.  Q had a runny nose and E had a stomach bug so we got tested for Covid and had a few days off of school.  It was a little confusing about the rules for testing, staying home, new versus existing symptoms, but we figured it out.  We had a small backyard birthday party for Q with our neighbours.  We were able to eat outside at restaurants and that was lovely.

October 2020 - We had to deal with some isolation days home from school for E since there were two cases of the school with whom he was a close contact.  His teacher did a fabulous job of online learning and I saw a marked difference from the previous school year.   We still kept quite close to home and we did have the neighbour kids in our house, but no one else.  E was able to have a small indoor birthday party with three close friends (from his class) and we felt comfortable with that.  Traditional trick or treating was cancelled in Toronto but we organized our neighbourhood so if people wanted to they could put treats outside for the kids to pick up in the early evening and that was fun.

November and December 2020 - We saw the cases rising again in Ontario and we knew we would be in for a long winter.  Toronto was locked down in late November and we stopped having people over to hang out inside. Thankfully school remained open and we were fine to stay at home the rest of the time.  We spent Christmas alone since having a second household of Dave's parents coming to visit was not permitted in the lock down zone of Toronto.

January to March 2021 - And then school remained closed after the holiday break, and the kids were back home for virtual school. Although we were a bit more organized than we had been in the springtime, it was still a lot to manage. Q is in Junior Kindergarten so he had online school but his attention span was short and he needed me to sit with him in order for him to participate.  We put in a good effort but we peaced out early most days.  E's teacher was phenomenal and he was able to do his classes and work independently.  We were extremely grateful that classes resumed in mid-February.  Toronto only just recently moved from the Stay At Home order to the Grey Zone.  March Break was pushed to April, so I'm hoping that the cases will level off (as they have started climbing again) and the kids will be able to return to school for the rest of the term and that summer camps will be available. 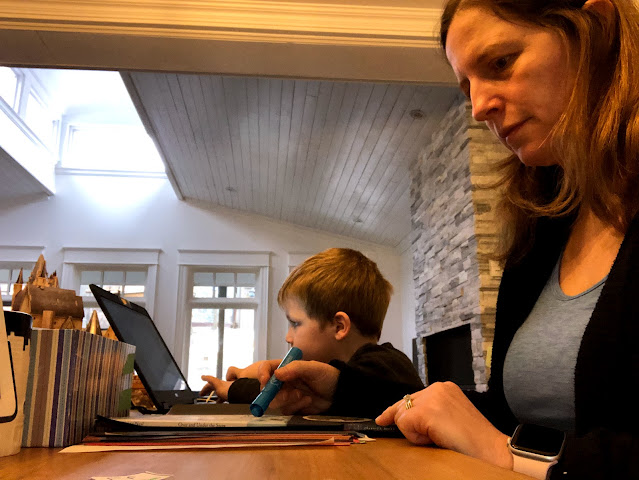 I saw an Instagram poll earlier this week that asked if you felt Sad or Grateful about being a year into this pandemic.  It didn't really occur to me to feel sad, I know we have missed out on a lot of things (seeing family from away, travel, sports, extra-curricular school activities, real time interaction with people outside of our family of four, enjoying our city's offerings, etc.) but we have all remained healthy, we have enjoyed many things that would not have happened if not for staying home.  When I do start to get disappointed I remember that the bible shows us many instances of people being alone and isolated and that God used that time to prepare them for something greater.  They were able to meet God in new and unexpected ways, so I am hoping that is what this time will prove to be for me.

So I suppose you could say I am Grateful for this time and I will be grateful for the opportunities that come out of this, for changing our habits, and appreciating all those blessings we will get to return to once we can safely do so.  This has been quite the time to live through and although we try to make comparisons to other times in our history, this is unique.  We have been extremely fortunate and I know that is not how it has been for everyone.  We kept our jobs and did not have to work outside the home, we have reliable internet so we could connect on our various platforms with ease, and we have a comfortable and safe home.  I know that staying home was not really to protect ourselves but to do our part to help protect others, the ones that can't stay at home and the ones that are much more vulnerable than we are.

Also remember this isn't over, we have to keep going for now, wear your mask (or two!), stay distance, avoid big crowds, and wash your hands. 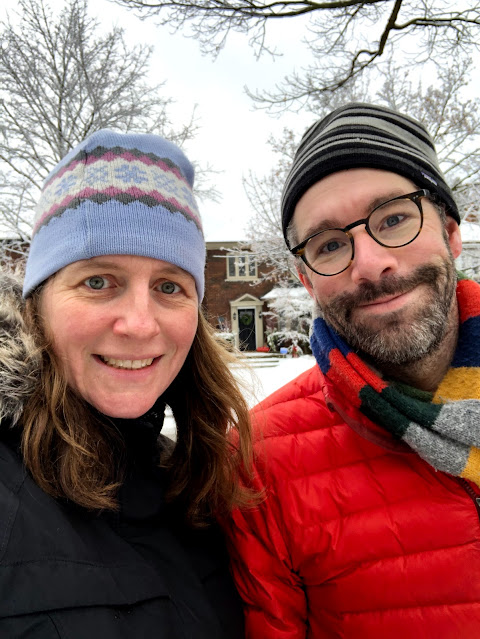