Over the past few weeks I participated in our church's lenten series on white privilege and racism.  Every Wednesday at lunchtime for an hour I joined a Zoom call with 15 to 20 other people.  We opened with a relevant devotional prayer and scripture reading, with comments from the minister, and then we would break into small groups to discuss the topic.  You can see our various topics here with some material.  This is obviously a timely topic and I was happy to participate.  In other times this would have been something conducted in person and I would not have been able to attend since I would have been at work.

I get my information from a lot of different sources and I like to think I am fairly reasonable at discerning what is the "good" information.  I know I am susceptible to confirmation bias since many of my sources are liberal leaning and align with my views.  I also know I'm never going to be done learning and adapting, but I do think I'm going in the right, progressive direction.

So something I found very interesting in our church group was hearing from people of different generations and backgrounds who were not up the same speed as me on a lot of these social issues (and of course a few people were farther ahead).  I sometimes assume that everyone agrees with me (or alternatively is showing me the way) so to hear these various perspective was a bit eye opening and I could see that because of these variety of opinions, change is slow to happen (and I realize that sounds so naive).  I will say that all discussions were respectful and although there were a few borderline offensive comments, they were productive sessions and I think quite beneficial to the people who attended.

A few of my takeaway thoughts from these sessions:

- People feel offended by the suggestion that they have white privilege.  They think people are mad at them for being white and since they can't change that, they feel attacked.  My thoughts on that is that people think privilege is a zero sum game, but it's not.  Lifting up other groups of people doesn't mean we need to take away anything from the white people.  It's not pie.

- I heard people saying "we should have a Black person come to these sessions and tell us how they feel and what they want." And I'm not by any means discounting what people of colour have to say here, but for me it's like we can probably figure that out pretty quickly; people of colour have been asking for the same thing for many many years and they are exhausted.  They want to be treated equally and not like second and third class citizens.  And not only that, hearing from one Black person is only their perspective, there are lots of people with different experiences and desires. 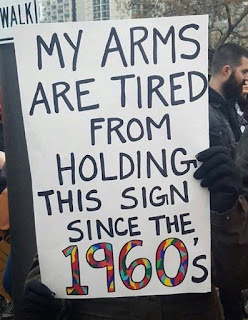 - Awareness that there is a problem is the first step.  Maybe we are not personally offended by a phrase, a picture, a statue, the name of a building or street, etc. but we should know and acknowledge that it is offensive to someone else and maybe have some empathy for that.  We should understand that certain phrases are not appropriate and to stop using them.  I also take the next step of calling someone out for using an offensive term when I hear it.

- And then taking that thought one step further, it is helpful to provide an explanation.  Saying "don't do that" without giving a global context about why it is important isn't helpful.  The person hearing it then feels defensive, but if you're able to explain how their actions or words are part of a larger problem, they may be better able to understand how their (small) change can make a positive contribution to a greater solution.  We grow up with a certain habits and views and for some people it's only been the last couple of years where they have realized those habits and views are problematic.

- We are not likely to say the right thing all of the time but I think staying silent for fear of being imperfect is a cop out.  A burden of our privilege is feeling awkward.  I mean, if that's the worst that can happen to us, I think we can manage it.  Speak, but then listen, see how you need adjust and grow. Start with good intentions, but direct those intentions into more. I heard numerous times, "Well I went out of my way to be nice to that person and they told me they were offended and felt I was being condescending!"  So in that situation, the speaker could just sit with the thought that since they were just trying to be nice, then it must be the other person's fault for feeling offended.  Or, they could recognize that their words were really micro-aggressions and that they should be aware of those and avoid using them next time.  I am constantly learning this.

I just wanted to pass along what I picked up at these sessions and maybe start you thinking too.