Welcome June! This is my favourite month because summer is really getting underway, it's my birthday month, and (usually) it's filled with lots of end of the school year parties/activities.

I wanted to start this weekend recap by saying that I spent most of the weekend thinking about Canada's residential schools following the discovery of the mass grave of 215 children in Kamloops, BC.  So many of my thoughtful and engaged friends on Twitter and Instagram shared information, thoughts, and grief about the tragic treatment of Indigenous people in Canada, but I wasn't sure what I wanted to say.  For this issue, I know it was terrible, I know that mistreatment (which is a woefully understated word) of Indigenous people continues today, and I know that there is work to be done for actual reconciliation to occur.  It was shock and trauma all over again when this grave was discovered last week, but it should not be an actual surprise to anyone, and when more mass and unmarked graves are found on residential school sites, it will not be a surprise then either.  As unsurprising that it is, to me, it remains unfathomable that so many parents had their children taken from them with many never coming home, and those that did return, coming back traumatized and alienated. And it also is unfathomable that there were so many people at those schools and in public office that thought this was fine.  Did they ever feel badly that they abused these little kids or did they only see them as little wild creatures needing to be tamed, no better than animals?  Did the religious people who ran the schools (my denomination, the United Church included!) really think they were doing God's work? I have a hard time with this part of it.

I'll leave it with this - there is work to be done - more than lowering flags, more than reposting Instagram stories, more than putting shoes out on your steps.  Those things are hollow symbols without  an adjustment in words, actions, and striving to acknowledge and recognize this shameful aspect of our country. Call on our government to spend the money to implement the Calls to Action from the Truth and Reconciliation.

I will continue to add my voice even though I have nothing new to say.  I will point out injustice and shame.  I will acknowledge the problem even though I cannot fix it alone or even know what to do. I will respect the experiences of people that I will never know myself.

So moving onto a few photos from our weekend:

On Saturday morning Dave went golfing and I took the boys to Marie Curtis Park (the traditional land of the Wendake-Nionwentsio, Mississaugas of the Credit First Nation, Anishinabewaki, and Haudenosaunee people*).

It was slightly chilly but still a beautiful morning.  We played on the playground and then walked down to the lake.  It was windy with lots of waves, and we were also delighted to see several kite surfers. 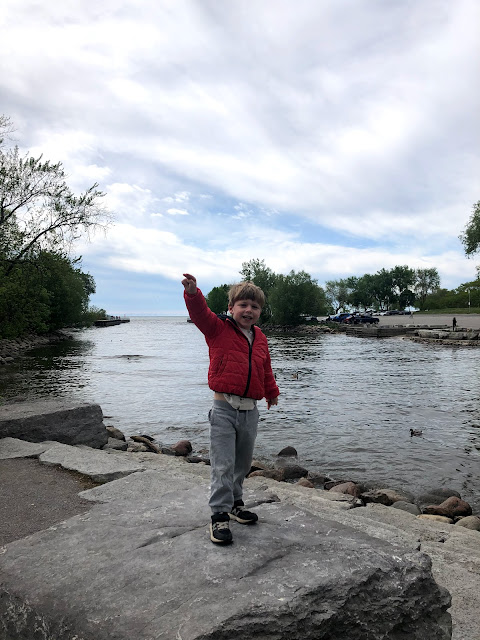 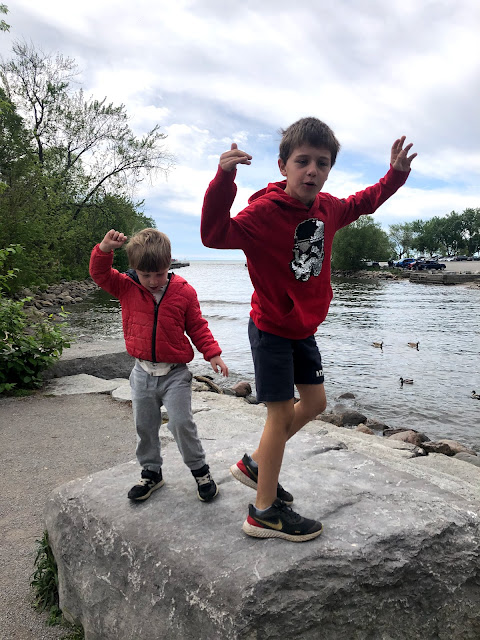 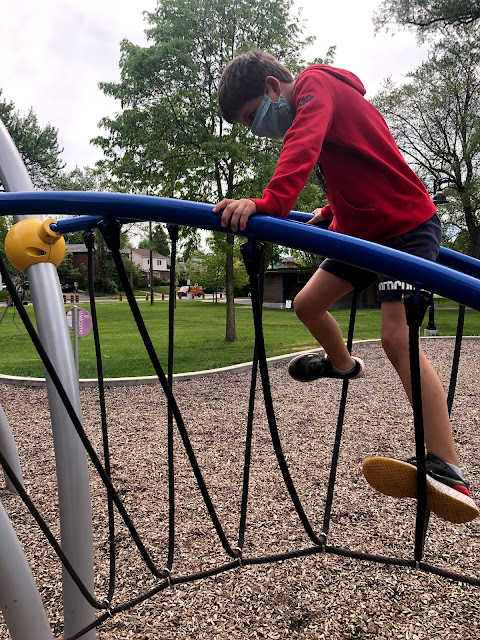 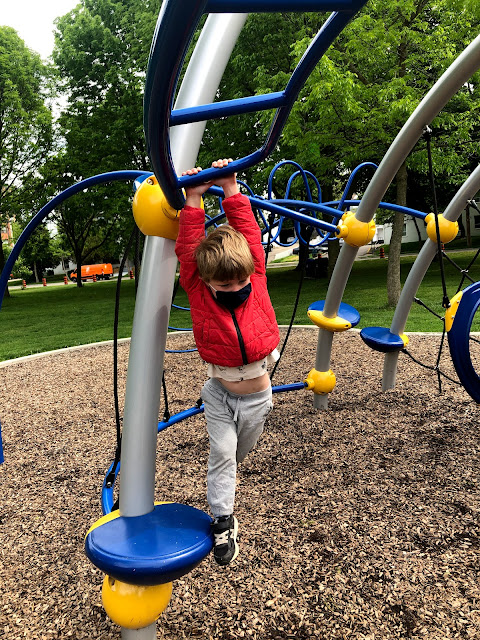 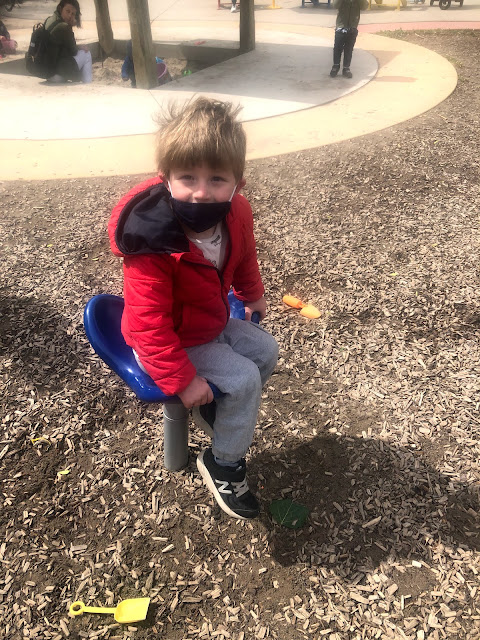 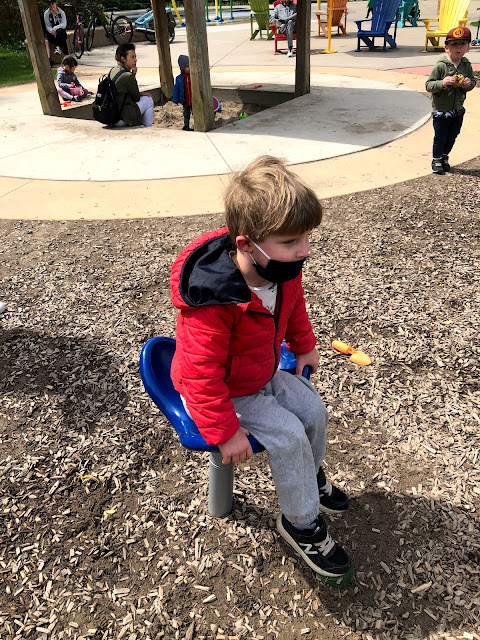 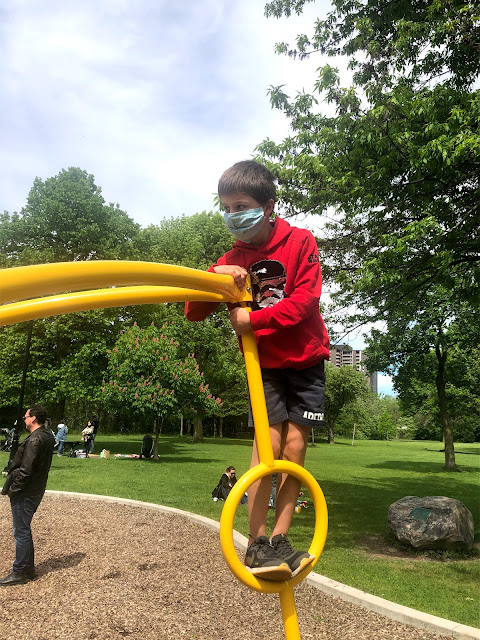 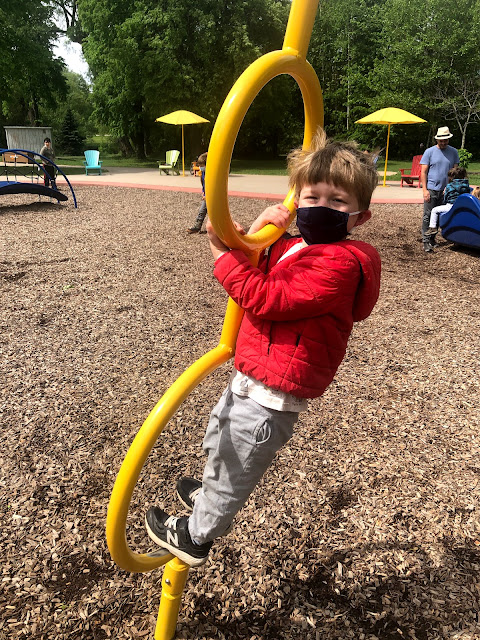 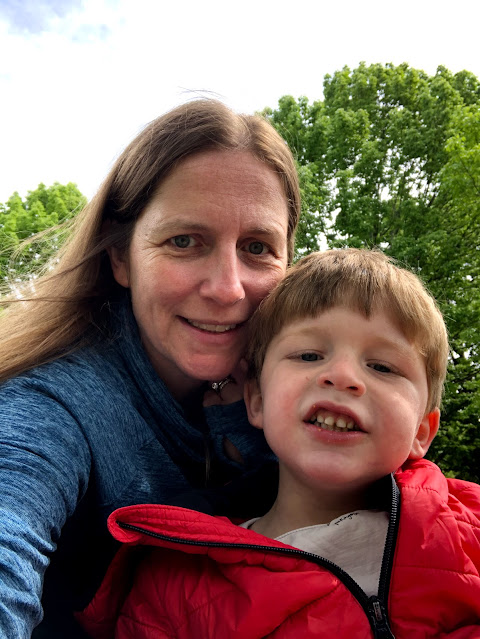 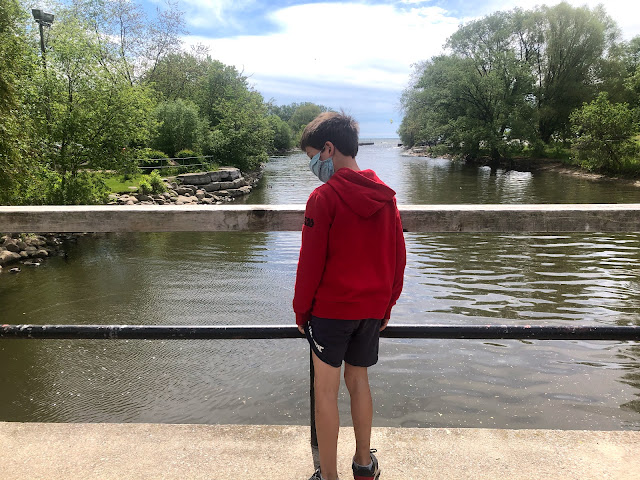 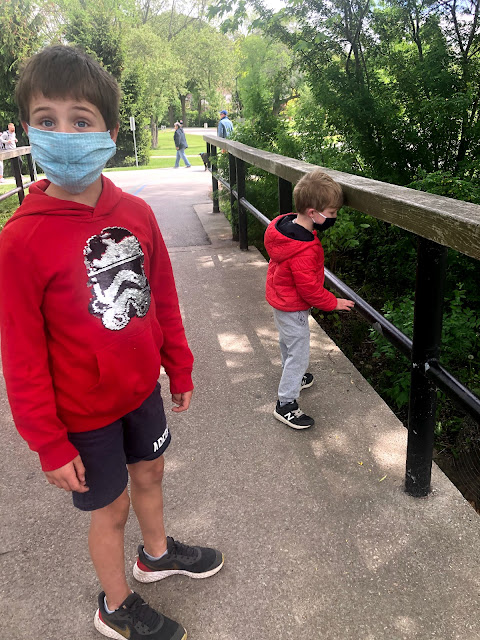 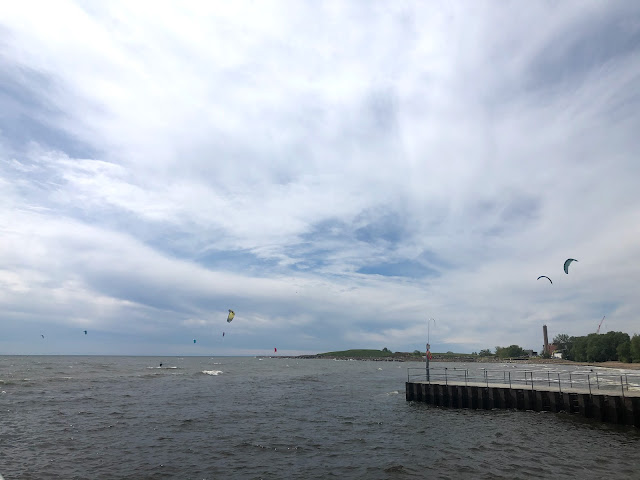 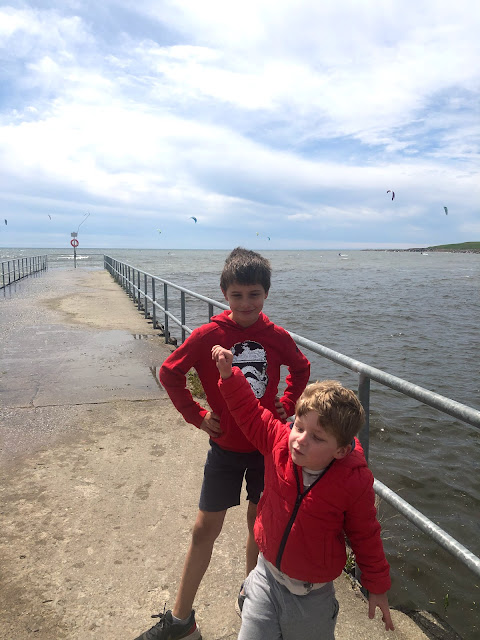 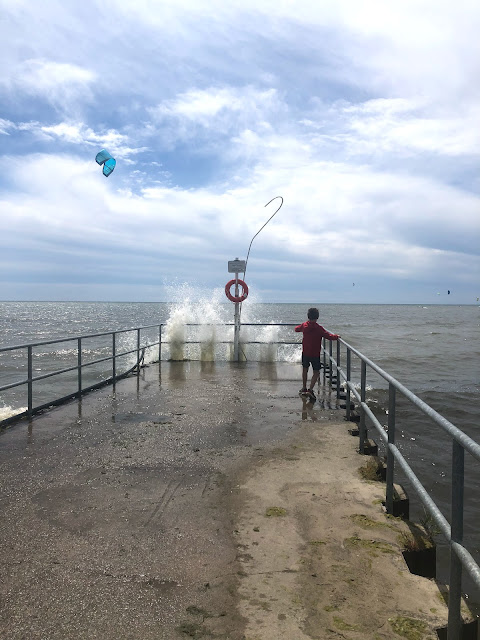 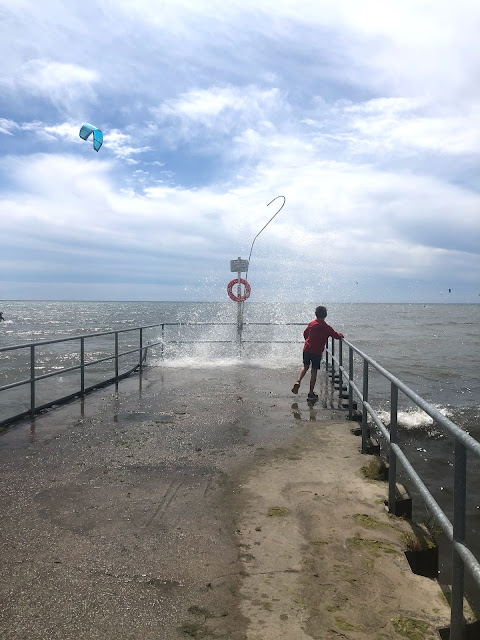 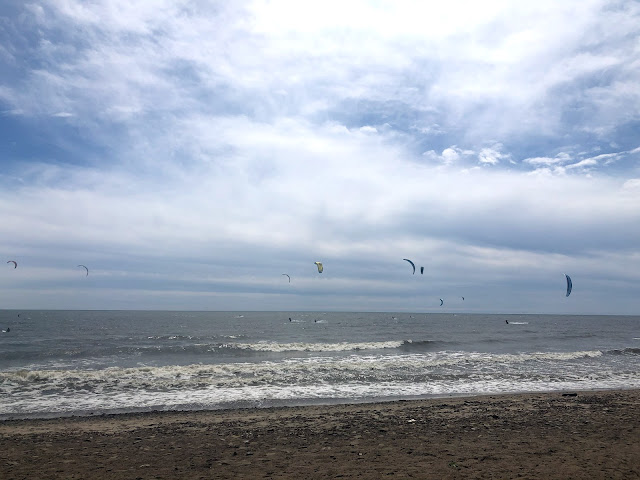 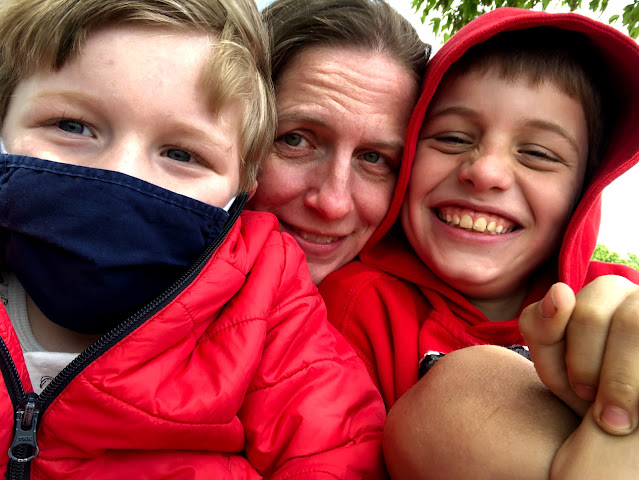 We stopped in at a bakery on our way home for a little treat - The Happy Bakers.  In the afternoon the boys played games for a bit, Dave cleaned the bathroom, and then I took the dishwasher apart to clean it up.  I do this about once a year and am always surprised what bits are found in there - this time the top of a pop can.  We had burgers for supper and then set up the backyard screen to watch the hockey game.
On Sunday morning Dave and E went to the golf course to hit a few balls on the range, while Q and I walked up to meet his friends for a treat from The Golden Gecko at the playground (Lessard Park where the same Indigenous groups I noted above lived, and spoke Ojibway*).  It was a lovely morning. 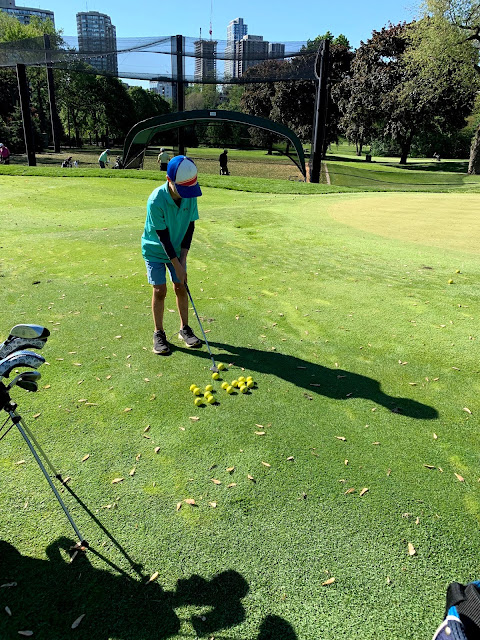 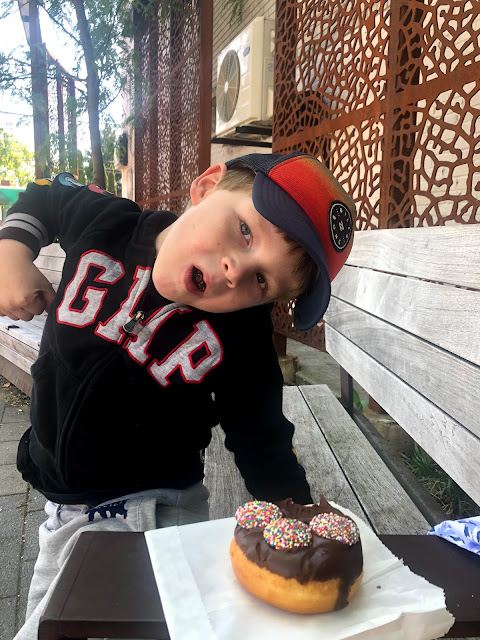 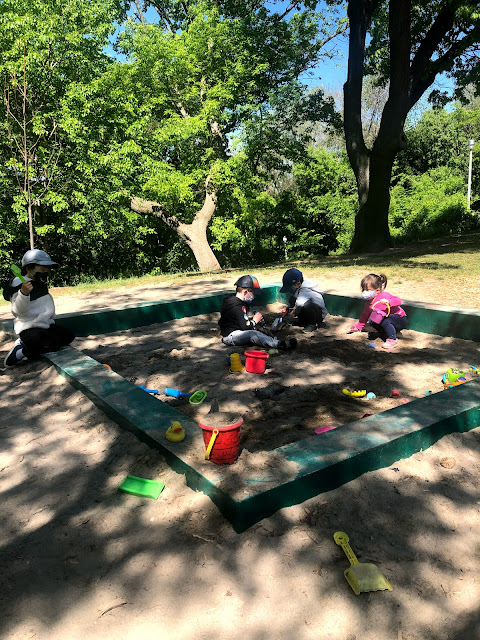 In the afternoon we went on a bike ride to visit some friends before heading home for our dinner - steak, pasta salad, and pie.

*Check out the traditional lands where you are located on the Native-Land website.