I read four books this month, two of them from my reading list.  Heavy on the CanCon this month.

First I read The Push by Ashley Audrain. 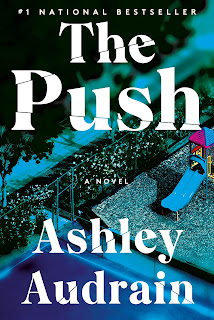 I read this one based on a long ago recommendation and they phrased it as a "thriller".  I didn't really think about it that way but I suppose that is one way to describe it. The book describes three different generations of women, with the youngest being the main character, Blyth, in the book. Blyth is newly married and then has children.  There is something a little off about her daughter, but she chalks it up to the difficult relationship she had with her own mother, and then the relationship between her mother and grandmother.  I thought it was extremely well written and kept me turning the page.  I got frustrated with Blyth but at the same time was empathetic.
I would highly recommend this one.  Plus the author is Canadian so that is always a positive for me.

Next up was Let Me Lie by Clare Mackintosh. 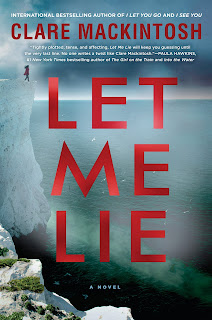 I am a fan of Clare Mackintosh and have read a number of her books.  I picked up this one when I was at the library looking for something else to bring home.  These books are mysteries where the reader is trying to gather clues to figure out what actually happened, and pointing fingers at everyone along the way.  In this one, the main character's parents had both committed suicide within a couple of months of each other.  Then a year later, she gets a note that leads her to believe there was more to the story than she thinks.  I like how Clare always has two points of view, one of them being a police detective, and then there is a switch halfway through the book with a big reveal.  This is another good one from this author.
The next two were on my reading list - first, The Strangers by Katherena Vermette. 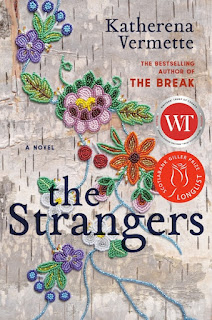 This is a Canadian book too.  It follows four women from the Stranger family in Winnipeg. They are Metis. There are two sisters, one in jail, and one who has spent much of her life in foster care, their mother, and their grandmother.  There are many other family members featured and thankfully there is a family tree at the beginning that I referred to a few times.  The book spans several years which I liked because I meant some things just happened and then referred to later without having to go through every detail.  It was a difficult read, especially as a mother because it was difficult for me to imagine having to leave my children somewhere, or not trying to help them, no matter what. But tough love, missed opportunities, stubbornness, drug abuse, and other things just got in the way.  It's not all bad stuff, there are some good moments that happen, but it is heartbreaking most of the time.  The theme is that everyone is connected through the generations and one decision can have many unintended consequences.  Sad, but good.
And the last one of the month was Small Game Hunting At the Local Coward Gun Club. 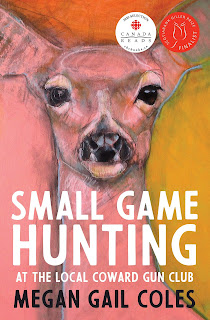 This book is set over one day with a restaurant in St. John's Newfoundland as the backdrop.  There are several different characters - the chef, the hostess, the waiter, the owner, and others - told from their points of view. We get all kinds of backstory and realize how everyone is connected, more than just because they work together.
When I was reading this, I kept thinking it was like a sandwich, where each passage, each page, was like taking a bite and you needed to chew through every bit of it.  You could not skim this book, or you could try, but you'd miss so many nuances and clues, as well as just little offhand comments that some would only understand if you're from Newfoundland.  This is definitely a worthwhile read and I'd love to talk to someone else who has read it and hear what they think.