Canadians are usually interested in what is going on with our neighbours to the South, and the last four years have been no exception.  I remember the tremendous sadness I felt with Donald Trump won the election in 2016.  Not only was he an abysmal choice on its own but I was so disappointed that Hillary Clinton, who has worked hard her whole life and was such a a qualified candidate, lost.  This was my post at that time.
Throughout Trump's term of office there would be certain events or declarations made where I thought, "Okay, Trump can't possibly survive this. He will be kicked out of office", and I would feel excited that this was it, he's gone.  And each time (and there were so many), nothing would happen. All would be forgotten and we would be onto the next thing.  So after a couple of years of that, I gave up, and my saying was "Just let me know when the series finale is on and I'll tune in then".  Meaning this seemed like a television series that kept giving us cliffhangers but then the series would just keep being renewed and the main characters remained.  If I hung onto each possibility that Trump could be removed, then I was always disappointed.  I even thought the "series" would be renewed for another four years, but now here we are finally at the series finale.
I will be watching the inauguration today and looking forward to the end of Trump's term.  I hope it is the last we hear of him although given his nature and that of his family members, I know they will probably be lurking somewhere.
I have always liked Joe Biden and I love that Kamala Harris will be there as his VP.  For many people, we feel like we can breath a sign of relief.  Although there will always be problems that seem unsurmountable, at least they will now be approached by an administration that is steady, calm, measured, and empathetic. 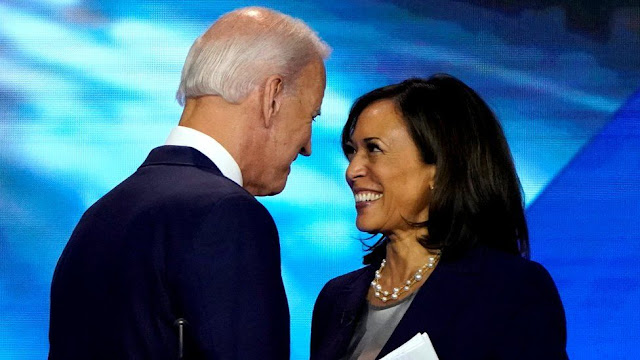