Only one book this month.  With the kids out of school and home all day I have little free time to read.  This book is the first one from my 2021 Reading List - The Skin We're In by Desmond Cole.  As I said when I added this book to my reading list, I purchased this book in June of last year when the Black Lives Matter movement heated up.  With all of the various topical books being suggested, I thought I would start with a Canadian one.

This book takes us through 2016 and discusses various race related events experienced by the author directly, or indirectly, and Black and Indigenous people he knew personally or from the media who suffered at the hands of police.  He writes about a kindergarten student handcuffed by police at a Mississauga school, a mentally unstable man beat to death by Ottawa police, a local Toronto artist arrested and beat up for having an art show without a liquor licence, and a young refugee from Somalia on the road to deportation. 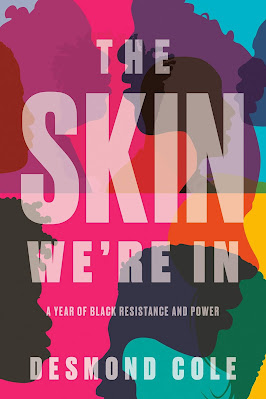 No one book is going to be the answer for us white folks who will all of a sudden understand the prejudice and downright violence experienced by people of colour.  These books can only help to build on our understanding, contribute to our knowledge, and introduce another perspective from what we have always known with our privilege.  It's one thing to talk about specific people who have been killed or injured by police, we know those names, we have heard those stories, and those things are easier to see as problems.  What this book does is go beyond that and address deeper issues of systemic racism.  There are two such topics I wanted to talk about here:
A few years ago I remember that the Black Lives Matter movement wanted the Toronto Police Department banned from participating in the Pride Parade.  I remember at the time thinking that didn't make any sense, why does BLM get to say what happened at Pride, those are two different groups.  And the police department has gay people so why can't they participate.  I didn't pay too much attention to the story and didn't ask any questions.  Because of my privilege, I was able to ignore it since it didn't have any effect on my life.
But after reading this book, I now get it; I know why it was a big deal for BLM to speak out on this, how Pride has evolved over time, and why having uniformed officers in a parade may cause trauma for marginalized folks who have often been targeted by police.  I also learned that the message that I was getting did not tell the nuanced story, which is partly why I didn't understand what the big deal was.  The media, although can usually be trusted to tell the accurate story, is also suffering from white supremacy history.  Because of that, we should be discerning about what we hear and ask more questions, do the research, and know that there is likely more to the story than what we are hearing.  Check your privilege and avoid making an ignorant comment, like I probably did when the BLM/Pride thing was happening. .

The other topic is about immigration policy in Canada. We are all very familiar with the people being detained at the border of Mexico and the United States, but you know, the very same thing happens here in Canada.  We keep people in jails when we are deciding whether to deport them.  We send people back to countries where they have no real ties, and could still be in danger.  We may think our system is perfect but it isn't.  That all being said, there was only one chapter about that in the book, and I'm sure there is a lot more to this story (see above point), but I think it is important to realize that systematic racism is alive and well in Canada, we can't pretend we are much better than the United States.

Also he talks about my hometown Shelburne, Nova Scotia, where many Black Loyalists went during and after the American Resolution.

So if you're looking for topical book on racism, please pick up this one.  If you are local to me, I'm happy to lend you my copy, just message me.  And you can follow the author on Twitter @DesmondCole.